"I was in London as a delegate to the Flourishing Diversity Summit in September of this year. It was a three day event and on the last day we heard the news that more fires had been set in the Amazon and that 1 1/2 tones of radioactive waters from Fukushima had been dumped in our ocean, it was like the Creator sent a bolt of lightning into the gathering composed of our delegates from First Nation globally and up to 300 invited guests. At that moment, Erena, a Maori elder, came on fire and in the traditional way of her People, she made a call to action. In full unity, the gathering stood with the Original Peoples as they declared their intrinsic sovereignty and declared to take back their Original Caretaker Roles of their territories."  ​ 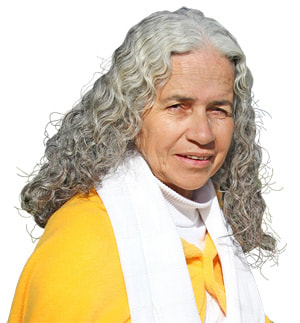 A CHOICE FOR PEACE AWARENESS
As a woman, mother, grandmother and great-grandmother my choice is for peace, for life and for the respect of all lives.
At this moment, I share this message to all who can hear me, and to Brazilians in particular.
We are facing a serious scenario that challenges the inner harmony of people, both personally and socially. The beliefs and convictions, and the physical, emotional and mental stability of people are in jeopardy. We are facing threats and counter- information. In the media there is no longer any control over the truth of what is being reported. What is going on is referred to as a democratic process, but that is not what we are seeing. There is a violent power, connected with international groups' interests and greed that is creating an obscure atmosphere that is trying to manipulate our choice. Most simple people are confused, believing in false news and in false promises. They are frightened and disoriented.
At this point we are challenged to make a choice and this choice will define the future of our nation and our people, for our children and for nature. It will even influence the whole world. We need to be really aware. We cannot act under pressure or impulse. We must meditate seriously within ourselves, within the inner temple of our hearts. Do we want weapons? Do we want torture? Do we want inequality? Will we condone racial persecution? Or do we want peace and freedom? Is it possible that guns, torture and brutality can serve to bring us peace? I think history has already proved to us that the answer is NO. The more weapons, the more suffering, the more hate, the more revenge, the greater the consequences for everyone. Why should we believe in the illusion that a weapon gives us power when we can believe in the power of love of a brother and sisterhood?
Whatever spiritual path we choose to follow, we learn that we are all in the likeness of the same Creator. That the light that shines in me also shines in every being of Creation. When this light is given the opportunity to shine in each one, it is then that we will know freedom.
Freedom teaches us the responsibility of our choice. If we are free and we choose evil, we will reap the fruit of this action. If we choose weapons, one day we will be hit by them. If we choose the destruction of the Amazon, we will be responsible for the drought all over the planet, not to mention the extinction of thousands of animal lives and plant species that hold great medicinal power. If we choose to withdraw the right of the indigenous peoples to their lands we will be annihilating the guardians of life and the natural richness of our planet; even more, we will be diminishing our roots and our ancestry.
When our choice affects the collective, then our responsibility is even greater. We must step with calmness and maturity for if we act impulsively we can fail. The
question is, do we choose peace or violence? In this moment we are being confronted with such a choice. Such is the gravity of our situation. If we choose to be neutral we are deceiving ourselves. Neutrality here is an illusion. The one who thinks he is being neutral is also responsible for the result of the collective choice. This choice seems political, but it is not. A deeper and more decisive choice is at hand. Are we going to choose to be human or are we going to negate our humanness? If we are human, we need to embrace our diversity, those who are most alike and those who are different. Everyone has the same right. Therefore, if our choice affects the rights and freedom of the other, our rights and freedom will also be affected.
Time now puts us before a great opportunity to develop and grow our consciousness. We must act with awareness. Not react. Do not act on impulse or by pressure.
My awareness as a mother, grandmother, great-grandmother, teaches me to act with love. With love and respect. We are all different, yet in all of us there is a longing for good, a longing for peace. Sometimes the disappointments that we go through in life create calluses in our feelings, and that may create reactive behaviors. We become rigid and disconnected from the original longing of our heart. But if we are calm, and if we learn to deepen the yearning for the child that dwells in each of us, surely we will find the choice for peace, happiness, freedom and respect for the beauty of nature and all of life.
I invite all of you to unite now around this great alliance for good, for brother and sisterhood, for respect for our lives, with all their differences, and be a pillar and instrument for love.
MAY ALL BECOME AWAKENED IN PEACE AWARENESS!!! Grandmother Maria Alice Campos Freire, Brazil